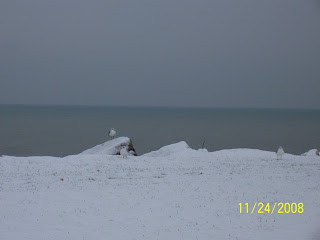 A Lakemichiblog first! This photo was NOT taken from the same location as all the others. I'm out of the office this week, and the first day away coincided, coincidentally, with the first noticable snowfall of the year. So I felt I had to take a picture. I stopped in at a local park, and tried to get a good angle. The first few pics were dull: gray water and sky, hazy and overcast. But then some chilly seagulls obliged to stand and huddle up within camera view. They're a little fuzzy here, but you can see two on the jutting rock, and then one off to the right. They look COLD! And it's only beginning, little gulls, this is no kind of cold. The worst (or from the perspective of someone looking for dramatic ice formations, the best) is yet to come!

Posted by lakelover at 12:02 PM No comments:

Lots of action on the Lake today, so I present several wave photos. These pics attempt to show the wave patterns that I find so fascinating. 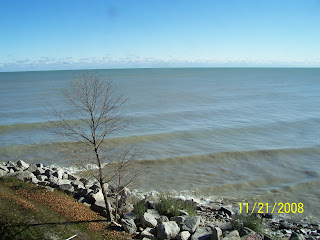 The photo above shows the ripples in the water before a wave has crested. 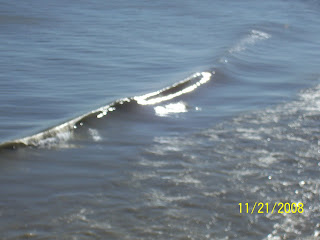 Here's a cool shot of a cresting wave... 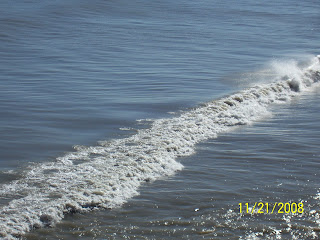 Here's a breaking wave with a full line of foam. 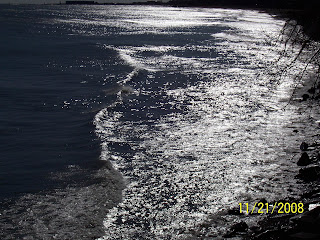 And here's the ebbing of the wave.
All of these photos were taken between 11am and 11:30am from the same building.
Posted by lakelover at 4:03 PM No comments: 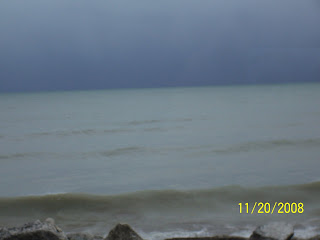 This is out of focus, and the darker sky and lighter, strangely colored water kind of scare me. Especially since it was taken at about 9:30am. The waves are pretty big and loud, though you can't see that here. 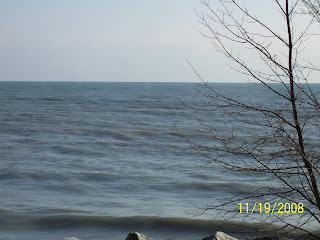 This is Wednesday's pic. Oddly clear sky with rather roiled up water.

Posted by lakelover at 3:19 PM No comments: 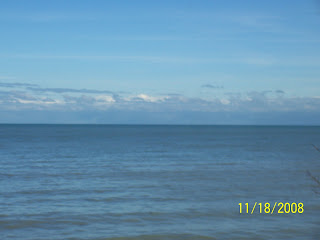 This is Tuesday's pic. It's been a long week...

Posted by lakelover at 3:16 PM No comments: 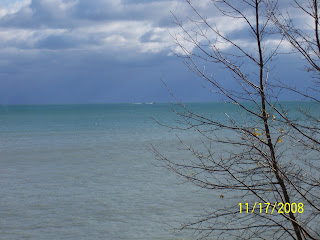 This is from the morning, when the Lake was a beautiful shade of green where it meets the blue sky. 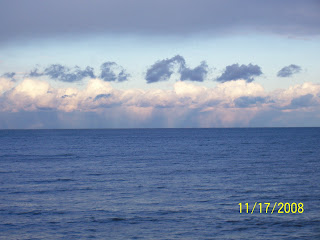 This is from this afternoon, when two contrasting banks of clouds appear on the horizon.
Today I also saw a large freighter, a speedboat, and a helicopter on the Lake. Such variety without even leaving my desk.

...the last four posts: Melancholy, Stripey, Weepy, and Frosty sound like the names of the 4 post-modern dwarves. Or some kind of holiday special with elves that tell heartwarming stories about accepting people with differences.

I've been reading Snow White to my 4 year old lately. And it's the end of the week. So sue me.

Seriously, though, writing the titles is one of the most creative parts of this process. Suggestions are always welcome.
Posted by lakelover at 3:58 PM No comments: 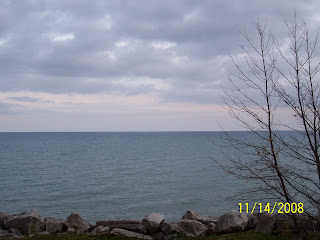 It's overcast, it's afternoon, it's Friday.

Posted by lakelover at 3:55 PM No comments: 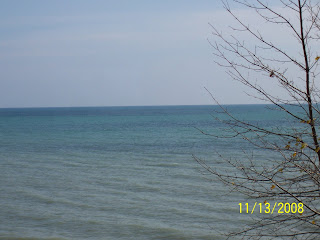 A day late posting it, but this is from yesterday. This doesn't capture it especially clearly, but the Lake had several distinct stripes of color yesterday: blue, green, gray.

Posted by lakelover at 3:52 PM No comments: 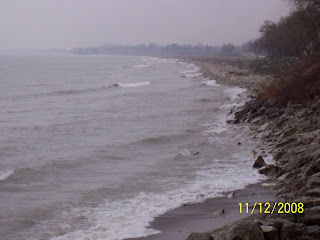 It sounds nutty, but it seems like the Lake has had a tough day, and is now having a good cry, including waves of tears and a gloomy countenance. It's not active enough to feel stormy, but not calm and still like yesterday either.

Posted by lakelover at 3:56 PM No comments: 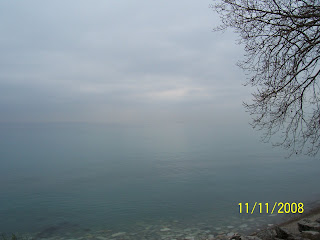 Last night we had our first hard frost, and the lake is still, though the sky is hazy.

The legend lives on from the Chippewa on down....

Today is the 33rd anniversary of the sinking of the Edmund Fitzgerald. My initial interest in this story comes from the haunting song by Gordon Lightfoot, but digging deeper shows it is a fascinating story in its own right. The Edmund Fitzgerald (named for an insurance company CEO) was the largest ship on the Great Lakes when it was built in the 1950's. The story of the storm and sinking is told in the song, below, and on this great website called The S.S. Fitzgerald Online.

I attempted to embed the Youtube video of the song, but it's my first try and it was unsuccessful. But click through and enjoy.

There is also a new-ish IMAX film called Mysteries of the Great Lakes, currently playing at the Milwaukee Public Museum. It features Lightfoot's song, and I hope to catch it within the month. There will be a review here when I do.

And now, for your "ear-worm" pleasure:

The Wreck of the Edmund
Fitzgerald
by Gordon Lightfoot

The legend lives on from the Chippewa on down
Of the big lake they call Gitche Gumee
The lake, it is said, never gives up her dead
When the skies of November turn gloomy.

With a load of iron ore - 26,000 tons more
Than the Edmund Fitzgerald weighed empty
That good ship and true was a bone to be chewed
When the gales of November came early

The ship was the pride of the American side
Coming back from some mill in Wisconsin
As the big freighters go it was bigger than most
With a crew and the Captain well seasoned.

Concluding some terms with a couple of steel
firms
When they left fully loaded for Cleveland
And later that night when the ships bell rang
Could it be the North Wind they'd been feeling.

The wind in the wires made a tattletale sound
And a wave broke over the railing
And every man knew, as the Captain did, too,
T'was the witch of November come stealing.

When supper time came the old cook came on deck
Saying fellows it's too rough to feed ya
At 7PM a main hatchway caved in
He said fellas it's been good to know ya.

The Captain wired in he had water coming in
And the good ship and crew was in peril
And later that night when his lights went out of
sight
Came the wreck of the Edmund Fitzgerald.

Does anyone know where the love of God goes
When the words turn the minutes to hours
The searchers all say they'd have made Whitefish
Bay
If they'd fifteen more miles behind her.

They might have split up or they might have
capsized
They may have broke deep and took water
And all that remains is the faces and the names
Of the wives and the sons and the daughters.

Lake Huron rolls, Superior sings
In the ruins of her ice water mansion
Old Michigan steams like a young man's dreams,
The islands and bays are for sportsmen.

And farther below Lake Ontario
Takes in what Lake Erie can send her
And the iron boats go as the mariners all know
With the gales of November remembered.

In a musty old hall in Detroit they prayed
In the Maritime Sailors' Cathedral
The church bell chimed, 'til it rang 29 times
For each man on the Edmund Fitzgerald.

The legend lives on from the Chippewa on down
Of the big lake they call Gitche Gumee
Superior, they say, never gives up her dead
When the gales of November come early.
© 1976 Moose Music,
Inc. 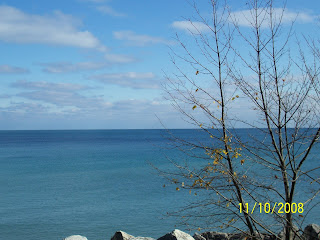 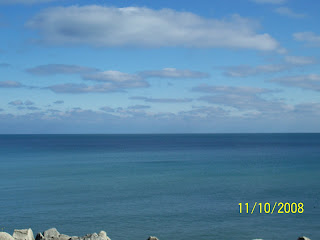 The moon shot (below) is more dramatic, but I love the colors in these pics, and the bare tree to signal winter's imminent arrival.

Posted by lakelover at 4:29 PM No comments: 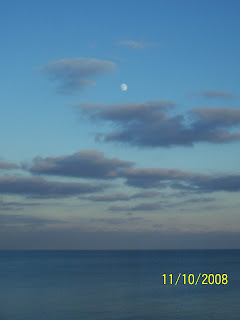 I took this at about 4pm. Amazing to see the moon so clearly.

Posted by lakelover at 4:16 PM No comments: 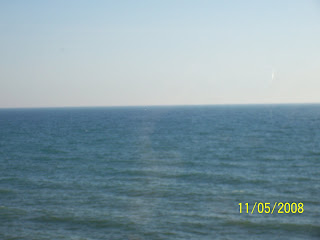 There was no post yesterday because I was out working to ensure our democracy. And now, for the first time in my voting lifetime, all the states surrounding Lake Michigan are blue. Indiana, that last Great Lakes hold out, a place where I have lived and voted in the past, actually selected a Democrat for President. So now, every single Great Lakes state, even every state that can see a Great Lake from their front porch (ha!) is firmly in the column of the Democrats. Obviously, I see this as a good thing. Other readers may not, but that's why this is my blog. Time t o breathe in the calm blue reality.... 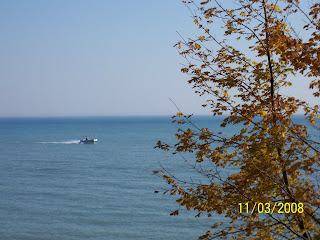 It's November now, as evidenced by the tree with rapidly diminishing orange leaves, but it's almost 70 degrees! There was someone boating on the lake this morning! Amazing.